The Best Weekend Trips in Florida 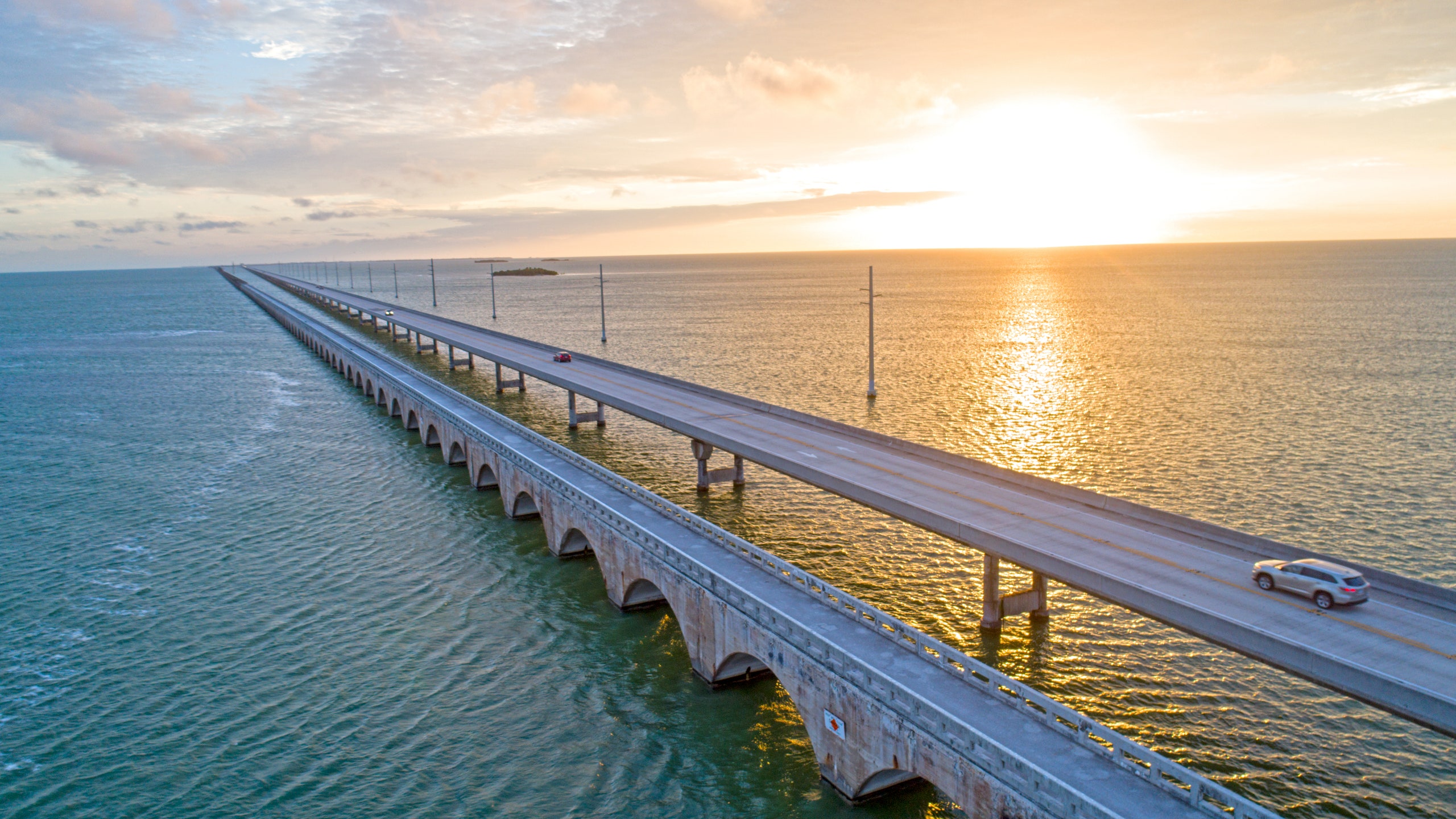 At its own pace everywhere, the world is slowly reopening its doors to travelers. And Florida—with its authentic beach towns and enticing white sands—leads the list as the nation’s top travel destination for those in search of much-needed weekend trips right now. “This comes as no surprise,” says Brett Holzhauer, a travel and credit card expert with ValuePenguin by Lending Tree. “Between being able to visit elderly family members, beaches, theme parks like Disney World reopening, favorable weather, and affordability, it makes it a perfect destination for all travelers.”

If you’re stumped on where to go—after all, the Sunshine State has more than 1,300 miles of coastline, and almost all of it is back open to beachgoers—we’ve got you covered on the best weekend getaways to take right now (or plan for later) across Florida. 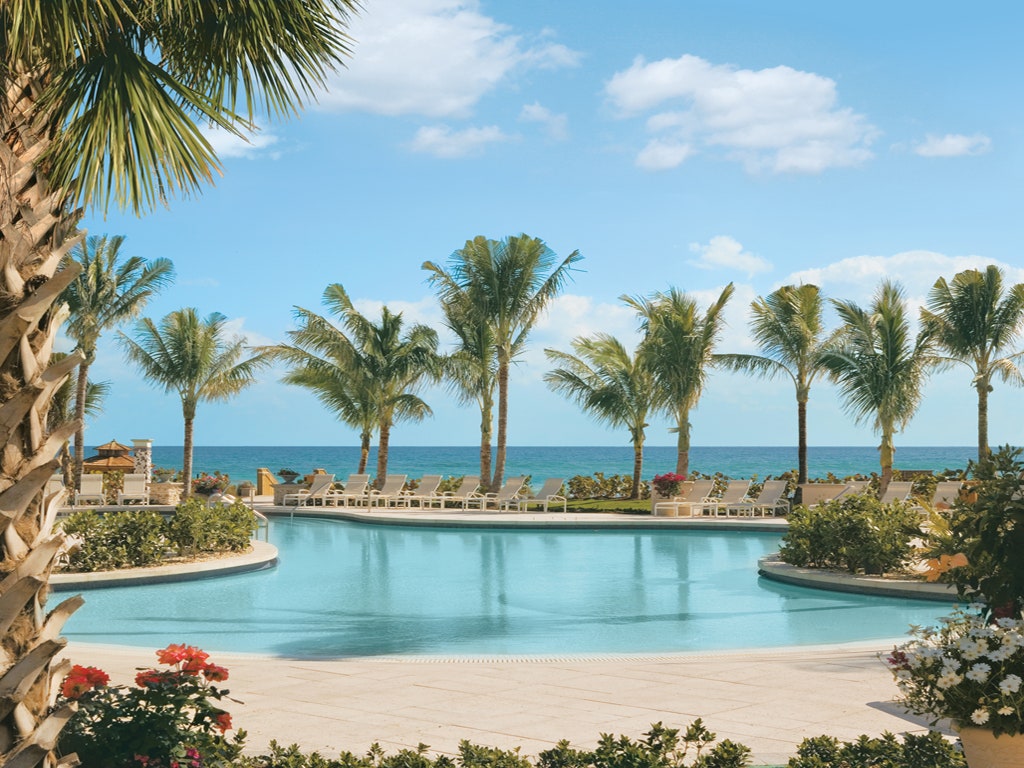 Florida’s grandest of grand dame hotels, The Breakers Palm Beach, re-opened its doors to guests on May 22, with enhanced health and safety precautions throughout the oceanfront resort (including luggage service on request only and valets that don’t touch your car’s doors). Another oceanfront favorite nearby, Eau Palm Beach Resort & Spa, has earmarked July 1 for re-opening. But there’s more to explore along this 47-mile stretch of the Atlantic Coast, including walkable beach towns like Delray and Lake Worth in addition to the moneyed enclaves of Palm Beach and Boca Raton. More than 90 percent of the hotels in the Palm Beaches are back open and welcoming guests, according to official tourism sources. But with so much to do outside (don’t miss the submerged snorkeling trail at the Blue Heron Bridge in Phil Foster Park, where you might spot sea horses and eagle rays), you’ll likely be spending lots of time in the sun.

With an ongoing schedule of rocket launches thanks to the commercial space industry here, Florida’s Space Coast—just east of Orlando on the Atlantic coast—is booming. For an authentic beach vacation close to nature where the focus is on the sun, surf, and sand, Cocoa Beach delivers with its pretty beaches and easy access to nature. There’s not much in the way of luxury resort life here, but the newly reopened and refurbished Beachside Hotel & Suites has a fun 1960s vibe and is a block from the sand. Make time for the short drive north to Titusville, where you can head out after sunset on bioluminescent paddling tours into the Indian River Lagoon with A Day Away Kayak Tours. Be sure to check the rocket launch schedule, too, for the show in the sky. 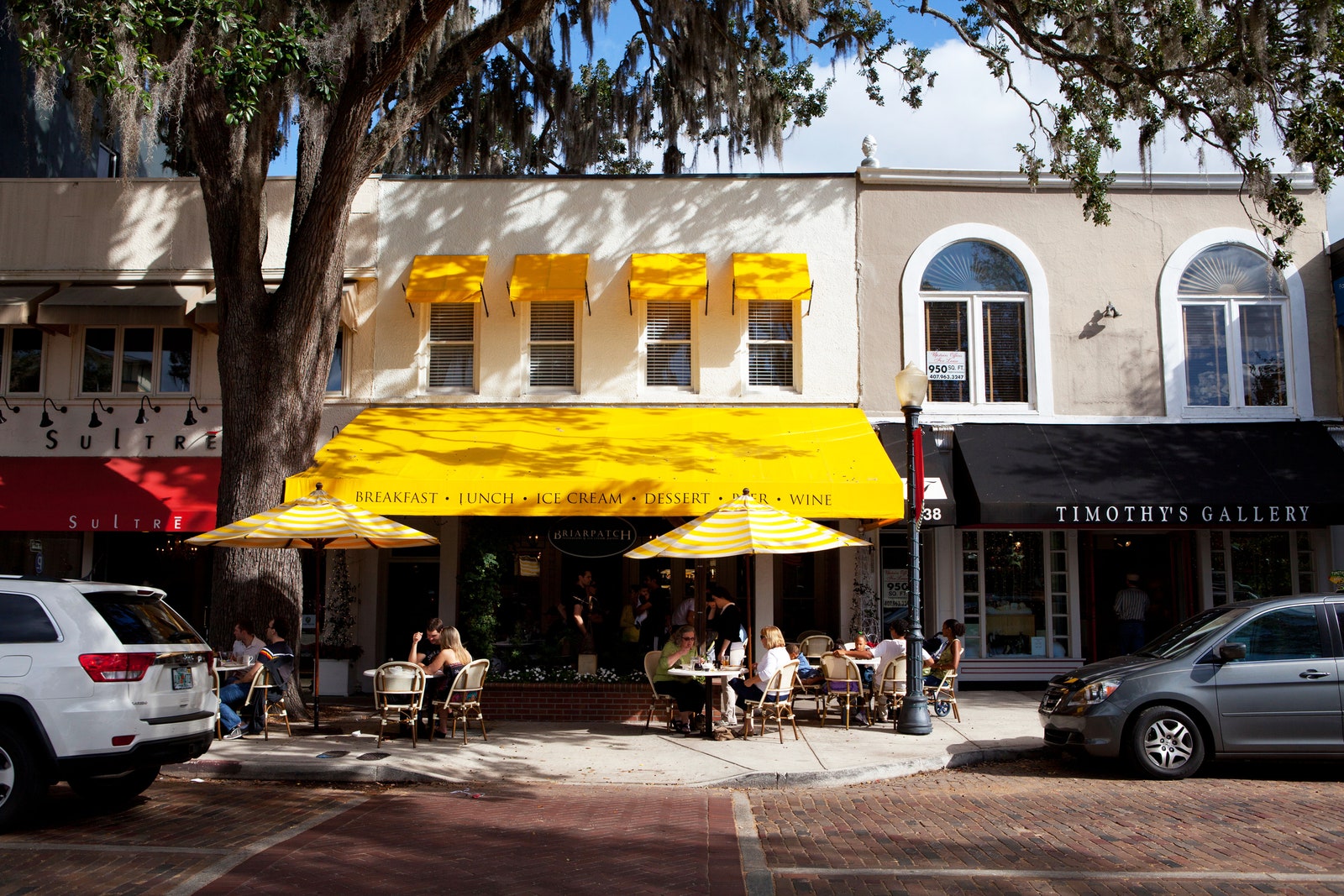 All of the amusement parks Orlando is know for, are OPEN! Walt Disney World, Universal Studios, Sea World, you name it. With extra safety measures in place, lots of people have already experienced the parks and can’t wait to go back. But there’s more to do in Orlando than park-hopping. Explore the pretty bricked streets of the Winter Park neighborhood (which feels, dare we say, almost European?), near downtown, from a home base at the boutique and art-centric Alfond Inn to see a side of their city that Orlandoans treasure.

Two wings of the same bird, St. Pete Beach and Clearwater Beach, deliver some of Florida’s most enviable white sand beaches, each with a distinct beach town ambience. Edgier St. Petersburg is known for its vast collection of street murals scattered throughout downtown, the Dalí Museum, and grand hotels like the cotton candy-hued Don CeSar, or The Vinoy. The new St. Pete Pier is finally open and is well worth a visit. Clearwater Beach skews extra family friendly with sands that are particularly powdery, nightly sunset celebrations at Pier 60 and stylish beach resorts fronting the Gulf of Mexico that include the Sandpearl Resort, Opal Sands Resort, and the Wyndham Grand Clearwater Beach. 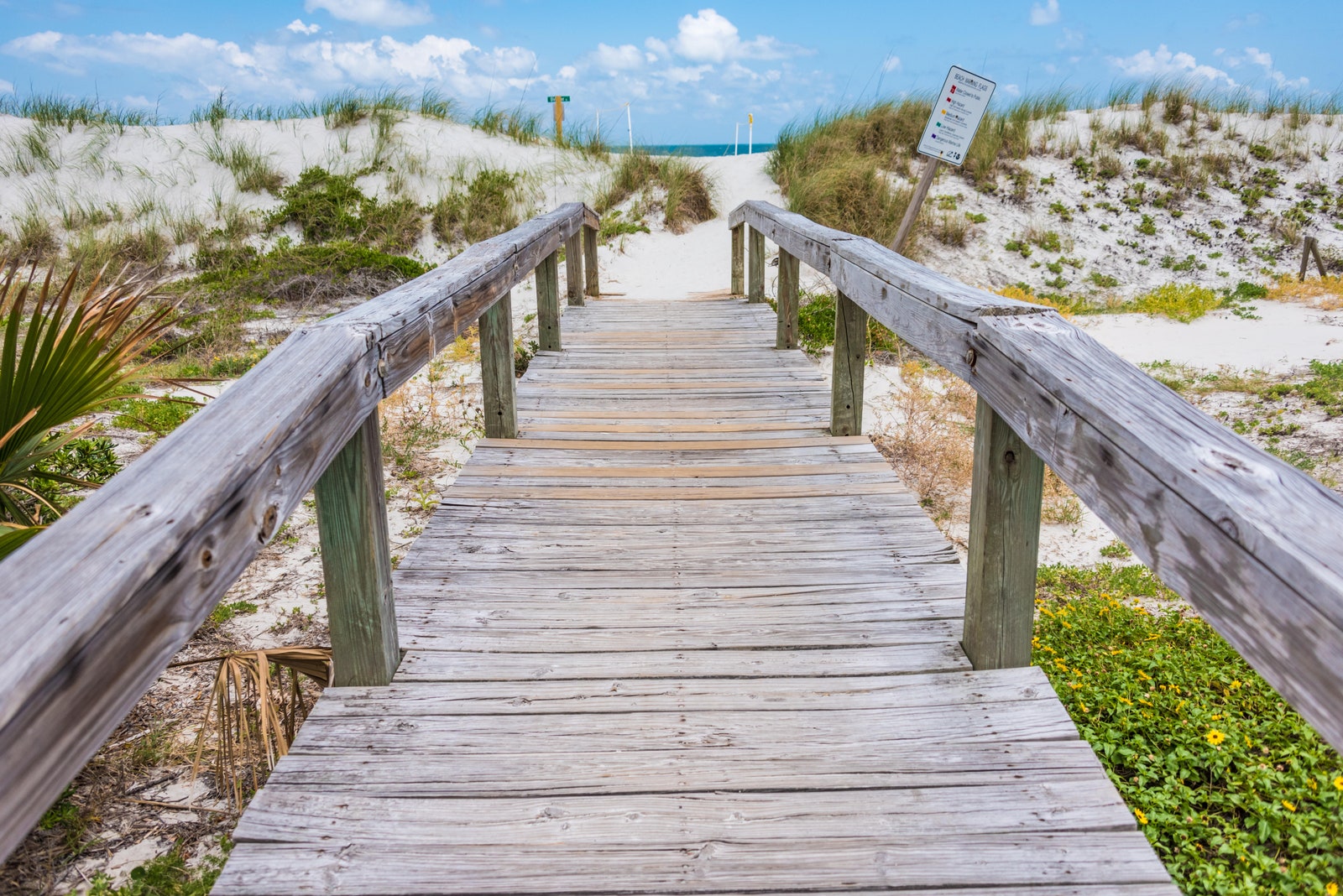 The first major beach resort area you hit heading south along Interstate-95 into Florida, the Jacksonville Beaches are a string of several laid-back communities. Atlantic Beach—home to the oceanfront One Ocean resort and miles of dunes backed with stately oceanfront homes—and the friendly little surf community of Neptune Beach are our favorites for their untrampeled-by-the-masses appeal. It’s an easy 33-mile road trip south for the day to visit St. Augustine, which claims to be the oldest city in the U.S. and is home to historic sites and preserved buildings, such as the 17th century Castillo de San Marcos National Monument (check the website for closures), a Spanish fortress with a commanding waterfront location.

About two hours south of Tampa along the Gulf of Mexico, Fort Myers and nearby Sanibel are known for great shell collecting on white sand beaches so pristine you may blink to be sure they’re real. Wildlife preserves and state parks abound along this part of Florida’s gulf coast, and the J.N. Ding Darling National Wildlife Refuge is a favorite with birders and for its Wildlife Drive, which you can tackle in a car, on foot, or by bike (just don’t forget the sunscreen). Downtown Fort Myers is a delight to explore, with its pleasant and pedestrian friendly River District snaking along the Caloosahatchee River. On a 330-acre nature preserve, South Seas Island Resort on Captiva Island (which adjoins Sanibel) offers hotel rooms, tennis villas, and entire beach homes among its many options for staying the night. 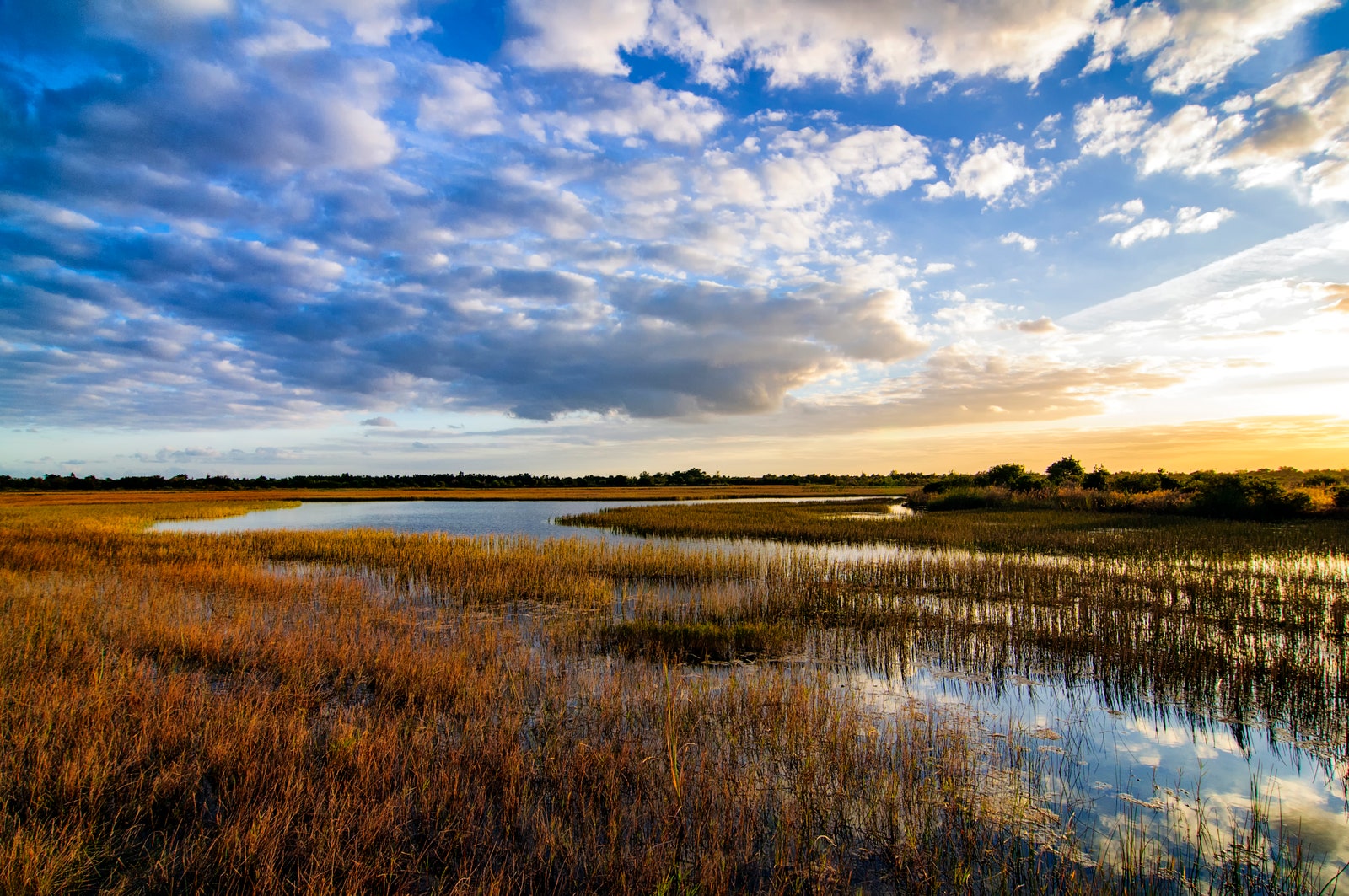 Continuing south from Fort Myers, the areas of Naples and nearby Marco Island make up Florida’s Paradise Coast, which has a tropical feel thanks to the mangroves (and mangoes, when in season) everywhere. You’re also close to one of the most renowned outdoor spaces in the U.S., Everglades National Park. The Gulf Coast Visitors Center entrance is in Everglades City—an easy road trip of less than an hour southeast of Naples—where you can head out on pontoon boat cruises into the Ten Thousand Islands. For a beautiful beach stay that will facilitate all those nature outings and plenty of strolls past the outdoor cafes along Naples’ Fifth Avenue, make your base LaPlaya Beach Resort in Naples, or the JW Marriott Marco Island, known for its great rum bar on the beach.

Less than two hours south of Orlando, Vero Beach is the point along Florida’s Atlantic Coast where things start to take a turn to the sub-tropical, South Florida vibe—you’ll notice it in the emerald tangles of palms and sea grapes, and the sapphire hues of the water lapping the coast. Lanai suites at the Kimpton Vero Beach Hotel & Spa—a boutique oceanfront spot that’s just a quick stroll to all the shops and cafes of downtown—make for a comfortable and convenient stay. Make time to check out nearby Sebastian Inlet, popular with surfers and anglers, and plan to kayak into the Indian River Lagoon with a rental from the Environmental Learning Center, where you’ll also find boardwalks and marine life exhibits to explore. 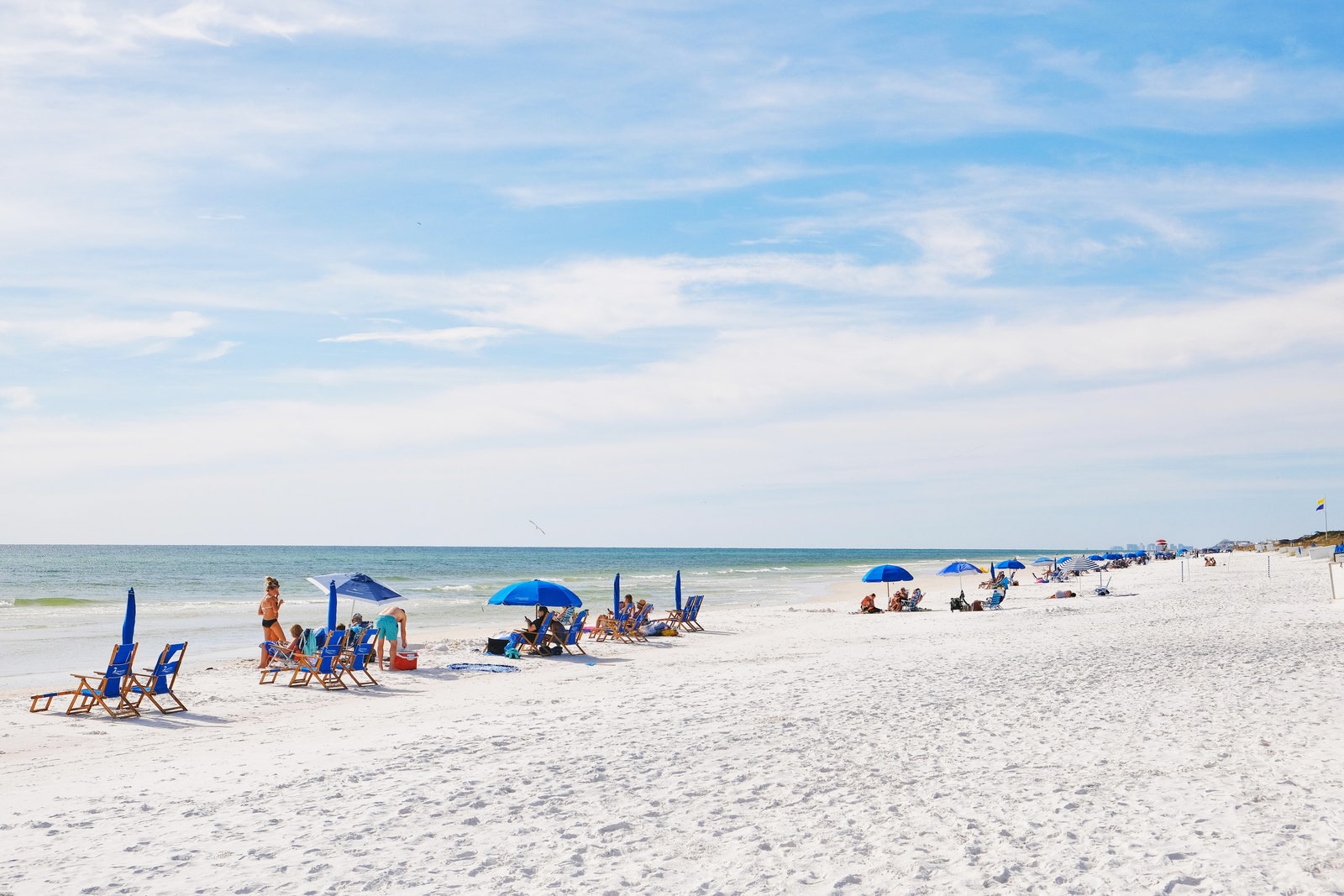 The beaches of the Florida panhandle, in Seaside

For the kind of water you thought only lived on screen savers and sand so fine you’ll want to pop it into an hourglass, the beaches of South Walton in Florida’s Panhandle rise to the top. Vacation rentals are plenty in spots like Rosemary Beach, Santa Rosa Beach, Grayton Beach, and Seaside. Iconic gulf coast properties like the Water Color Inn, fronting the Gulf of Mexico, are welcoming guests, too. Ecotourism opportunities get you out enjoying Florida’s nature at every turn, whether by ebike along the sandy backroads or from the seat of a kayak, exploring Northwest Florida’s best watery trails.

Often overlooked by visitors drawn to the big name beaches of St. Pete and Clearwater, this largely residential island just south on the gulf coast, less than an hour from Sarasota, is a slice of old Florida many don’t know exists. Anna Maria Island is a great place to score a vacation rental on a canal or fronting the Gulf of Mexico. (Pineapplefish has the prettiest of the bunch), or you can stay in nearby Holmes Beach at the Waterline Marina Resort & Beach Club, with slips for travelers with boats in tow. Anna Maria Island has no chain stores and golf carts are the preferred mode of transport. You can pedal everywhere, too, with a Surrey (or regular) bike rental from Beach Bums. 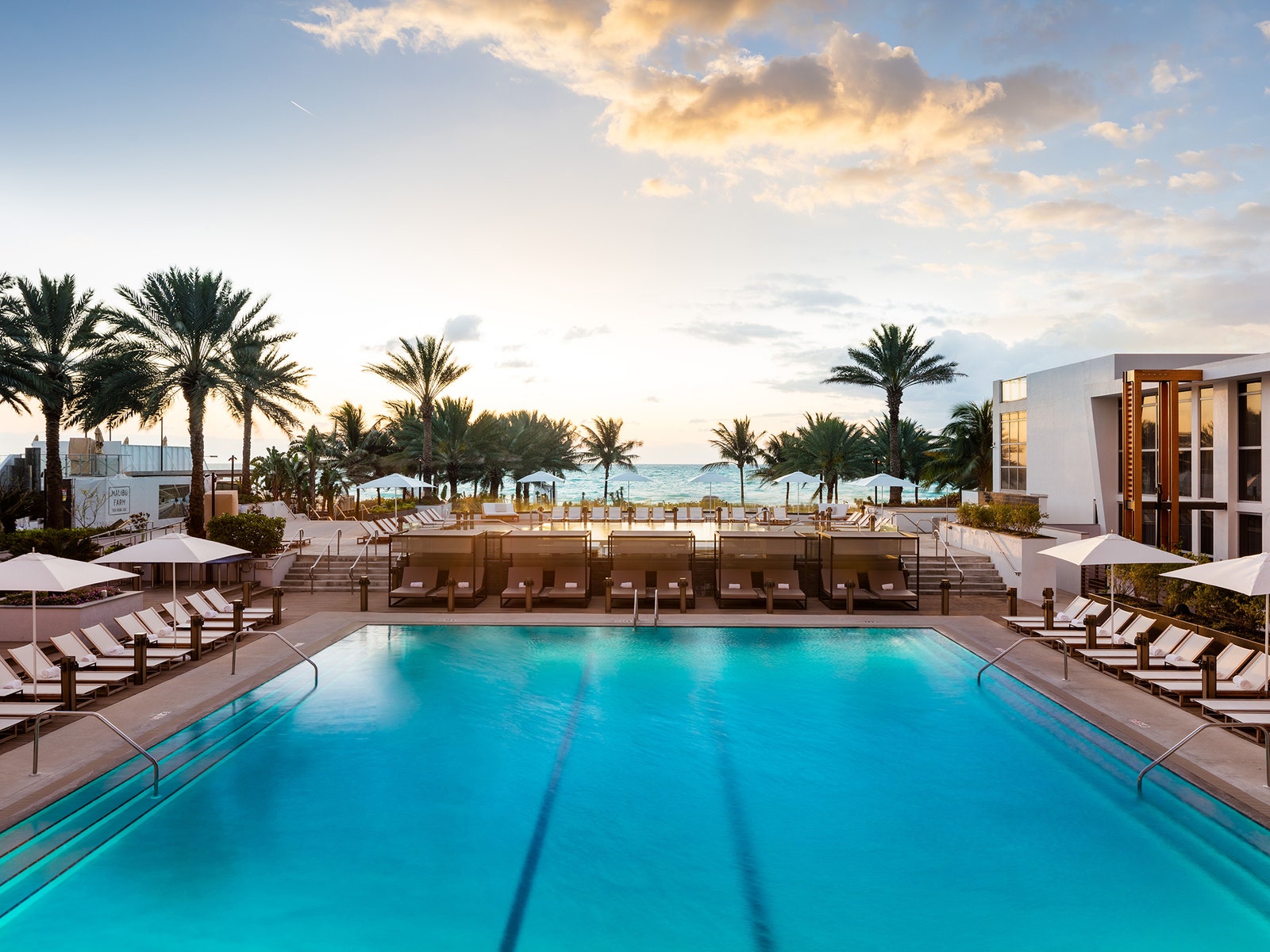 With the beaches scheduled to reopen in June, Miami will be back beckoning vacationers who wouldn’t have Florida any other way—that is, with its warm-as-the-Caribbean waters. Restaurants along Ocean Drive have expanded their outdoor seating capacity for al fresco dining. Among the South Beach hotels re-opening their doors imminently are the Eden Roc Miami Beach (June 4), Faena (June 12), and the lovely Palihouse Miami Beach (June 12).

Officially re-opened to visitors on June 1, the Florida Keys and Key West might be the weekend getaway in Florida that will connect you with what a true vacation in this state is all about. Made mostly of coral, the islands that make up the Keys aren’t known for their beaches, per se. Rather, it’s all about getting out onto—and, preferably, into—the turquoise waters via boat trips, snorkeling excursions, or on a kayak or stand up paddle board. You’ll want to be back on land in time for the ritual of sunset spectating, of course, to toast with something tropical and frosty. Key West has the bulk of the resorts and hotels, as well as endless restaurants and bars to explore. But low-key, world class resorts abound throughout the Keys, and include two noteworthy adults-only havens: the newly refurbished and just-reopened Little Palm Island Resort & Spa, on its own private island, and Bungalows Key Largo.

We're always available to help out, get in touch with us any time, or shoot us an email.

Thank you for contacting us, we'll get back to you shortly.

Sorry, we are unable to send your message at the moment. Please try again later.